After getting some basic performance statistics for a very setup describe in my previous blog, I decided to put together my own box that will be my ZFS based Storage Server. There are a bunch of sample setups and they vary in price and perforance, here are a few I ran into:

My setup is closer to the last one on the list. Since was this going to be in my home, I didn’t really want to be loud but I will wanted it to be powerful enough.

After looking through various pages and comparing different specs, I ended up getting the following parts:

Here is a picture while I was putting everything together :) 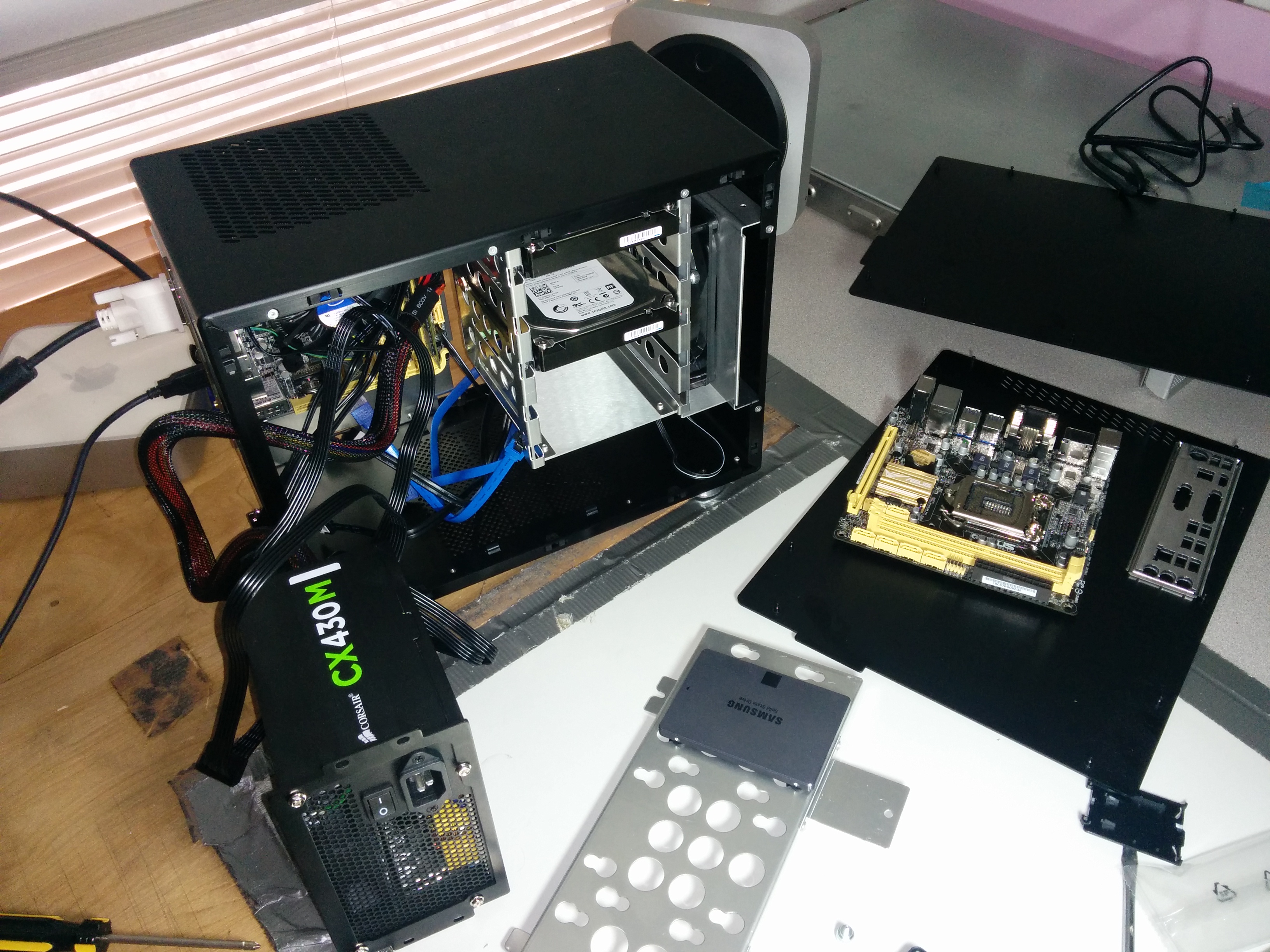 Initially I wanted to see how my SSDs performed and here were some dd results:

My plan wasn’t to use those directly, with ZFS we can use them for L2ARC Cache and as a ZIL pool. But I wanted to check what the SSDs were capable of.

There are a bunch of sites that talk about what ZIL is and what it’s used for, I found these two sites the most useful:

From the top site:

The ZFS intent log (ZIL) is provided to satisfy POSIX requirements for synchronous transactions. For example, databases often require their transactions to be on stable storage devices when returning from a system call. NFS and other applications can also use fsync() to ensure data stability. By default, the ZIL is allocated from blocks within the main storage pool. In this Solaris release, you can decide if you want the ZIL blocks to continue to be allocated from the main storage pool or from a separate log device. Better performance might be possible by using separate intent log devices in your ZFS storage pool, such as with NVRAM or a dedicated disk.

And from the second site:

Using a ZIL is faster than writing to the regular pool structure, because it doesn’t come with the overhead of updating file system metadata and other housekeeping tasks. But having the ZIL on the same disk as the rest of the pool introduces a competition between the ZIL and the regular pool structure, fighting over precious IOPS resources, resulting in bad performance whenever there’s a significant portion of synchronous writes.

But the biggest benefit can be obtained by using ZIL devices that can execute writes fast. Really fast. And that’s why we at Oracle like to make such a great fuzz about Flash memory devices. From Oracle’s Sun F5100 Flash Storage Array to the Sun Flash Accelerator F20, both running on cool, space-saving Flash Modules, to standard, enterprise-class SATA/SAS SSDs.

I found a pretty good blog: ZFS L2ARC and that describes what L2ARC is:

The “ARC” is the ZFS main memory cache (in DRAM), which can be accessed with sub microsecond latency. An ARC read miss would normally read from disk, at millisecond latency (especially random reads). The L2ARC sits in-between, extending the main memory cache using fast storage devices - such as flash memory based SSDs (solid state disks). .. .. A previous ZFS feature (the ZIL) allowed you to add SSD disks as log devices to improve write performance. This means ZFS provides two dimensions for adding flash memory to the file system stack: the L2ARC for random reads, and the ZIL for writes.

The page Explanation of ARC and L2ARC was pretty informative as well:

ZFS includes two exciting features that dramatically improve the performance of read operations. I’m talking about ARC and L2ARC. ARC stands for adaptive replacement cache. ARC is a very fast cache located in the server’s memory (RAM). The amount of ARC available in a server is usually all of the memory except for 1GB. .. .. Another thing to remember is you still need to use SLC SSD drives for the ZIL drives, even when you use MLC SSD drives for cache drives. The SLC SSD drives used for ZIL drives dramatically improve the performance of write actions. The MLC SSD drives used as cache drives are use to improve read performance.

Here is what I ran to add each:

You can confirm both are added by using the status command:

So before using the SSDs as ZIL and L2ARC, doing a quick DD test to the HDDs, I saw the following:

Then here is the after test:

We are definitely enjoying the SSDs cache here :) Here is the DD test from the napp-it interface with both ZIL and L2ARC (the read test is awesome): 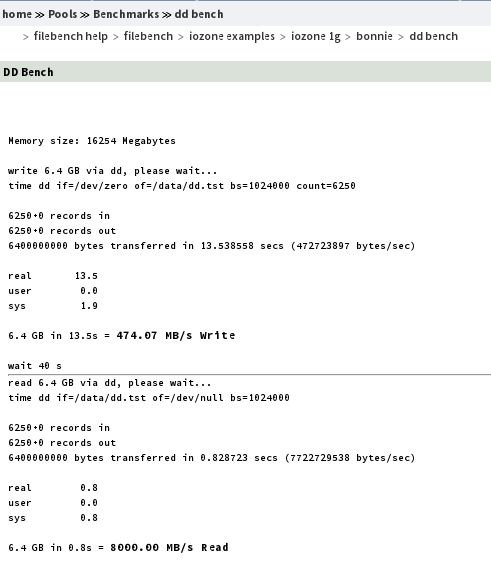 I ran the same tests that I ran in the original post and here were the results for small IO: 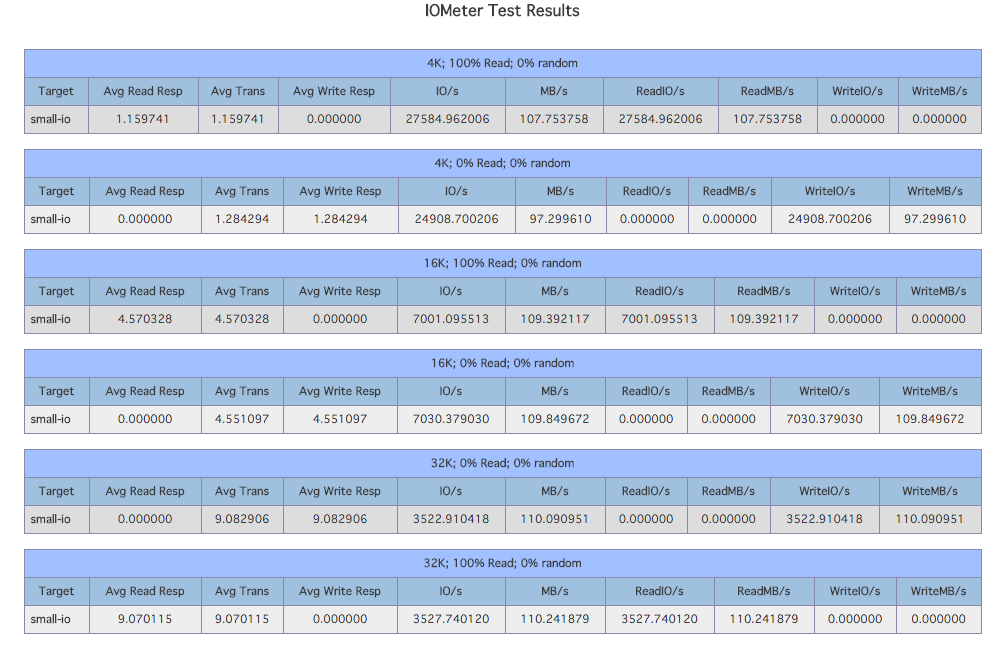 The results were very similar to the original test and that’s because I am still getting stuck at my 1GB NIC and Switch limitation. I think in the future I will try get a hold of a Switch that can do port link aggregation and install a multiport NIC on the ZFS machine to setup link aggreation on that side as well (Overview of Link Aggregations)

My backups were completing much faster now, here are the results after the storage upgrade:

You can see the results before the upgrade in my old post.