I initially install dd-wrt on the Asus RT-AC68U Router (the instructions for that are here) and I actually really liked it. But I remember that the performance of the AsusWRT firmware is supposed to be better.

I recently got a fiber connection for my WAN and I wanted to see what speed I can reach. Plugging my laptop directly into the Modem, I saw the following:

That’s really good. Then plugging my laptop through the Router, I saw the following:

And here are the results with wifi:

It wasn’t as good. So I decided to try out AsusWRT

Create a backup of DD-WRT

Before completing wiping my router, I decided to create a backup. First go to the admin UI and export the config. Administration -> Backup and select Backup: 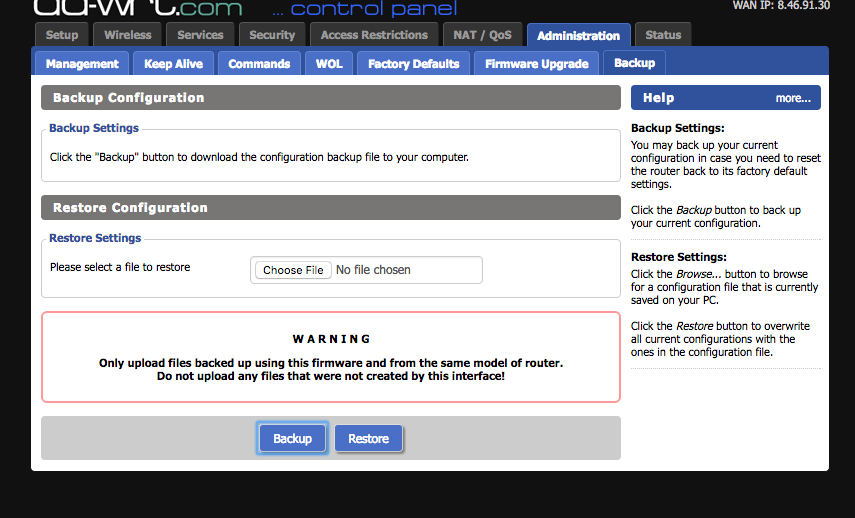 It will download a file called nvrambak.bin for the backup. I also grabbed the contents of the /jffs and /opt directories since I had a USB drive plugged in. First install a better version of tar (after ssh‘ing into the router):

And then create a tar archive:

Then scp that backup to another machine:

That should get your covered.

First get the latest stock firmare from the Asus Site. For the Asus RT-AC68U Router I found it here. I downloaded the latest version and ended up with the following file:

If you extract the zip you see the trx file:

Put the Router into Recovery Mode

From the Router’s Manual pdf:

To launch the rescue mode and use the Firmware Restoration utility:

I noticed there are two procedures, from the Router’s Manual pdf:

This button resets or restores the system to its factory default settings.

If things get really bad you can use the following instructions which I found at the asuswrt-merlin FAQ page:

Q: How do I put the router into Recovery Mode?

A: Turn the router off. Press the reset button, and while keeping it pressed turn it back on. Wait a few seconds until the power led blinks, and then release the reset button. Router will now be in Recovery Mode, reachable at 192.168.1.1.

Q: How do I wipe my settings?

A: Press the reset button for more than 5 seconds, then release it.

Q: How do I wipe my settings? Reset button does not work.

After the router is in the Recovery/Rescue mode, install the Firmware Restoration Utility and launch it. I was using a Mac, and I actually found it in the App Store: 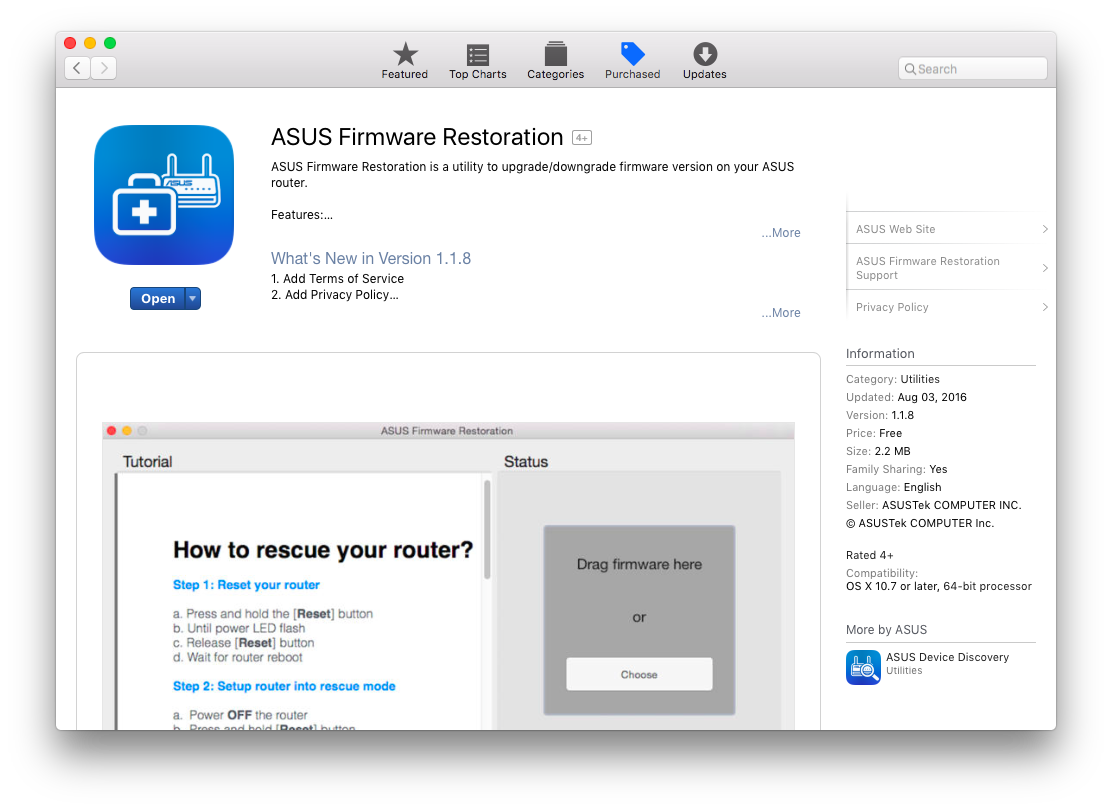 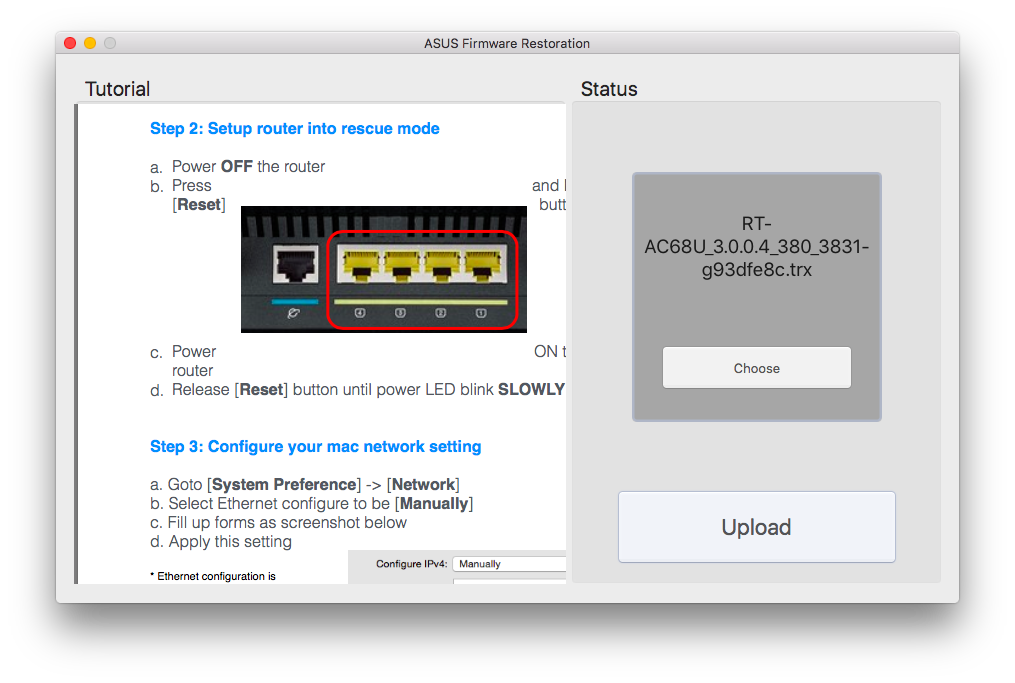 And then after you click Upload, it will start the upload: 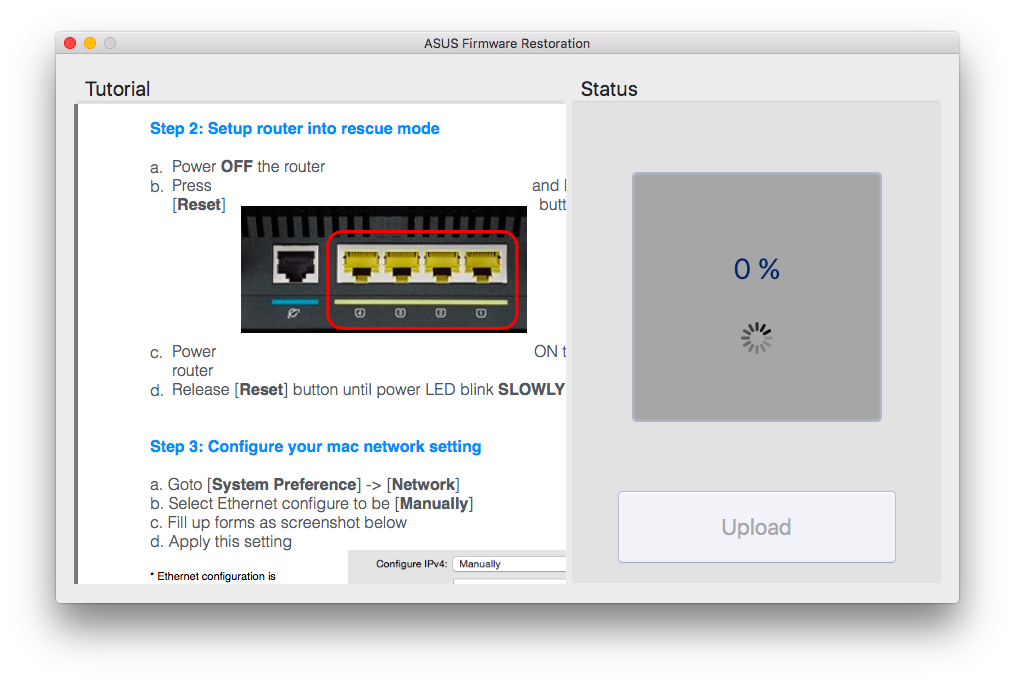 If all is well it will finish the upload and ask you to reboot your router. Then you can visit http://192.168.1.1 to finish the configuration.

After I installed and configured AsusWRT, I decided to run another speed test and here is what I saw:

That’s a little bit better :) Here is the version I was on:

While I as at it, I decided to install the Merlin Firmware since it’s pretty much the same as AsusWRT with just a couple of more options. First I went to this page and downloaded the latest firmware. I ended up with the following file:

After extracting it, I just grabbed the trx file:

So from the AsusWRT Admin UI, I went to Administration -> Firmware Upgrade and uploaded the new trx file and clicked Upload: 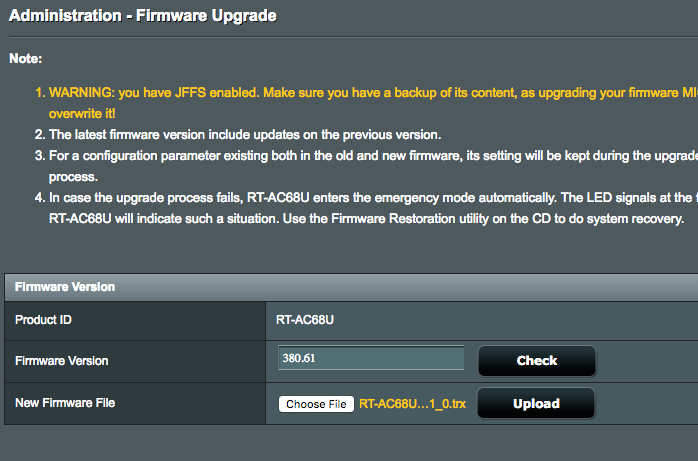 After the update was done, here is the version I was on:

After upgrading the stock Asus Firmware to the Merlin Firmware here were the results of the speed test:

Very similar results and I get cool features, like SNMP and traffic stats saved to a usb disk (full list is available here). I also ran a test with wi-fi and it was pretty much the same accross both versions of AsusWRT:

One thing that I missed from DD-WRT is the ease of the setup for VLANs, but luckily it’s still possible with the command line. This forum talks about the setup. Basically we can use the robocfg command to configure VLANs. Here is the default output from that command (before I made any changes):

When I was initially testing, I ran the following to get what I needed:

But when I tried to add to a script it would freeze my router, eventually I realized that after enabling a couple of options the default config changed to have the vlan 1 port to have 8t instead of 5t (which makes sense, since that applies to a 1GB interfaces, more on that here). So I ended up with the following script on the router which worked for me (and survived a reboot):

I wanted to use my existing setup as described in here and here. The iproute2 utility ip is always causing problems. This time around the ip link show <int> or ip link show dev <int> would not work on the router:

But the ip link show command would work:

Luckily ip addr worked fine. So to integrate with fwbuilder I did a couple of things. On the FWBuilder side, I configured it to drop the script under /jffs/scripts/nat-start:

and to run a custom install script (/jffs/firewall/firewall.sh):

The install script removes the ip link show dev references and replaces them with ifconfig which still works and then it runs the script:

And lastly I unchecked the Verify interfaces before loading firewall policy, this got rid of the ip link show commands:

After those changes, I was able to successfully push the firewall of type dd-wrt with jffs without issues.

On my dd-wrt router I also used dnsmasq as a DNS server, it was pretty convinient, but there is no UI for such a setup in AsusWRT so we can configure it via custom configs. There are nice examples of the setup steps at Custom domains with dnsmasq and Enforce Safesearch. In the end I created the following configuration:

And then I just restarted the dnsmasq service:

Entware is the new version of optware and is available for AsusWRT. The setup is covered here. We basically just run entware-setup.sh and that’s it:

Now I can use opkg to install nice cool packages on the router.

After the many changes that I made, I realized I couldn’t make any changes in the admin UI. Any time I would hit Apply, it would just log me out. I ran into this forum and one of the folks mentioned that after changing the default IP, he ran into the issue. So I thought that it’s probably the issue with my vlan3 interface, so I ssh‘ed into the router and down’ed the interface:

And then I was able to make changes without issue in the Admin UI. Also going to the page by IP vs hostname, helped out.

CTF or Cut-Through Forwarding is achieved by the router starting to send out transmission frames as soon as it receives its destination. However, the router relies on the end device to tell it whether the data is corrupted for resend. This restriction can cause problems with a few common home uses.

When you have CTF or level 1 NAT Acceleration disabled, the router will “store” the entire frame before sending it out to its destination. This holding period may require more router’s CPU use.

Unfortunately some network feature are not supported with NAT Acceleration. Here is a quick list:

The Port Forwarding impacted me the most. I noticed that some ports worked and some didn’t, which described some of the behavior other folks saw. But I also noticed that SSL enabled ports (80 vs 443 … and other similart services) worked all the time. So this gave me a chance to SSL enable most of the services. If you end up disabling NAT Acceleration then the VLAN configuration will change from: